This post is a continuation of the three previous posts:

HOW HAS THE CARGO CULT SPREAD THROUGHOUT THE SOCIAL SCIENCES?

Regrettably, the misery does not come down only to the lack of behaviour in the science of behavior and the overlapping scientific theories. In 2010, another painful blow to the arrogant psychology of the Western world was the publication, of a famous article “The Weirdest People in the World.”[1] The article was written by three scientists of the University of British Columbia, i.e. Joseph Heinrich, Steven J. Heine and Ara Norenzayan. They demonstrated that the output of contemporary psychology may be relevant only to an exotic group of societies which they have called WEIRD. This catchy name s in fact a play on words since the adjective weird is at the same time an acronym that consists of the first letters of the adjectives: Western, Educated, Industrialised, Rich and Democratic.

The analysis of research studies in six subdisciplines of psychology , published in the top journals from 2003 to 2007, carried out by Heinrich and his colleges, shows that the 96% of the subjects came from industrialized Western countries which make up just 12% of the world population. In this number up to 68% were  from the United States of America. What is interesting, the authors examined also the content of the premier journal in social psychology – the JPSP. They revealed that 67% of the American samples (and 80% of the samples from other countries) were composed solely of undergraduates in psychology courses which means that the chance that the research subject was a randomly chosen American student is four thousand times bigger than that it was someone from beyond the circle of Western civilization. As a result, our knowledge about the human nature is based on the little group that the researchers have given a name WEIRD.

However, the lack of representativeness of psychological researches is not the main cause for concern. After all, it may turn out that in many aspects the human nature is consistent, and that the way we see, for example, proportions does not depend on whether we live in the United States or on the steppes of Kaukaz. Unfortunately, this is not the case. The authors have also conducted a comparative analysis of the obtained results in many different fields, such as visual perception, fairness, cooperation, spatial reasoning, categorization and inferential induction, moral reasoning, reasoning styles, self-concepts and related motivations, and the heritability of IQ. It turned out that the people referred to as WEIRD strongly differ from other populations and they also often obtain extreme scores. The most surprising thing is that such apparently basic cognitive processes as size or shape perception are different in many cultures.

A striking example of this is the study of the Müller-Lyer illusion illustrated in Figure 1. Since the author first described it in 1889, it has no doubt found its place in every psychology textbook, at least in those dealing with the perceptual regularities. Most of us see the upper line as longer than the lower one, whereas in fact they are identical. But some studies, which show that it is not necessarily an illusion, and if it is, it is only for us – people from WEIRD societies, have the effect of a bucket of cold water over the head. Members of the San tribe that live in the Kalahari valley see these lines as equal and are completely undeceived. When we ask people from different cultures about the differences in the lengths of the lines, we find the highest scores (the largest discrepancy) when studying American students. Could it be that, as suggested by Heinrich and his colleagues, the alleged illusion was only a by-product of our culture?

This example comes from the group of comparisons made by the authors between industrialized societies and small-scale societies. Within one group that was called  Contrast 1 they also pointed to huge  differences in fairness and cooperation in economic decision-making, on folk biological categorization, reasoning, and induction, as well as in spatial cognition. In the summary of this part of their analysis they concluded:

Given all this, it seems problematic to generalize from industrialized populations to humans more broadly, in the absence of supportive empirical evidence.[2]

The second part of their analysis entitled Contrast 2 was devoted to comparisons between Western and non-Western samples. The authors examined four of the most studied domains: social decision making (fairness, cooperation, and punishment), independent versus interdependent self-concepts (and associated motivations), analytic versus holistic reasoning, and moral reasoning. Although Heinrich and his colleagues noticed that robust patterns have emerged among people from industrialized societies, however Westerners emerge as unusual – frequent global outliers – on several key dimensions. Many of these differences were not merely differences in the magnitude of effects but often showed qualitative differences, involving effect reversals or novel phenomena such as allocentric spatial reasoning and antisocial punishment.

Given the dominance of American research within psychology and the behavioral sciences the authors decided that it would also be important to assess the similarity of American data with that from Westerners more generally. The part of the article entitled Contrast 3: Contemporary Americans versus the rest of the West revealed that American participants are exceptional even within the unusual population of Westerners, as they called them – “outliers among outliers.”[3]

The majority of behavioral research on non-clinical populations within North America was conducted with undergraduates. Therefore Contrast 4 investigated how  typical contemporary American subjects compared with other Americans. This is what it revealed:

Some documented changes among Americans over the past few decades include increasing individualism, as indicated by increasingly solitary lifestyles dominated by individual-centered activities and a decrease in group participation (Putnam 2000), increasingly positive self-esteem (Twenge & Campbell 2001), and a lower need for social approval (Twenge & Im 2007). These findings suggest that the unusual nature of Americans in these domains, as we reviewed earlier, may be a relatively recent phenomenon. For example, Rozin (2003) found that attitudes towards tradition are more similar between Indian college students and American grandparents than they are between Indian and American college students. Although more research is needed to reach firm conclusions, these initial findings raise doubts as to whether research on contemporary American students (and WEIRD people more generally) is even extendable to American students of previous decades.[4]

The analysis performed byHeinrich and his colleagues exposed fragility of the entire structure that we call psychology. One must keep in mind that the authors have analyzed only its fragments. In search of the truth about man and the human nature, we will be struggling through natural barriers that arise in the course of research but also through heaps of papers with overgeneralized conclusions formulated by careless scientists. While overcoming such obstacles we need to keep in mind what the authors of the analysis have highlighted in their closing words:

The sample of contemporary Western undergraduates that so overwhelms our database is not just an extraordinarily restricted sample of humanity; it is frequently a distinct outlier vis-a` -vis other global samples. It may represent the worst population on which to base our understanding of Homo sapiens. Behavioral scientists now face a choice – they can either acknowledge that their findings in many domains cannot be generalized beyond this unusual subpopulation (and leave it at that), or they can begin to take the difficult steps to building a broader, richer, and better-grounded understanding of our species.[5]

Several years ago I was giving lectures entitled Psychology as a Cargo Cult Science. At the beginning I usually showed a clip from a documentary  about cargo cult believers. I played this clip without a word of introduction and observed the audience. For many people it was  shocking to watch how cargo cult believers had built their runways in the middle of the jungle, how they had lit bonfires on them, and how serious they had been about those practices. The audience watched the movie in silence and with concentration. However, as the lecture went on,  most of them were not even partially shocked when they learned how scientists, rather than focusing on examination of behavior, stay busy with asking us how we will behave in a number of situations and how, with the solemnity of the cargo cult believers, they calculate results of such research, seek correlations, and diligently publish articles on this subject. As they do so, their blood boils whenever other self-reports expert challenges their interpretation at some conference devoted almost entirely to self-assessment declarations of the analyzed subjects. In the same way, my audience was not alarmed when I made further comment to explain all those declarations and introspective self-reports had been collected from members of a small tribe that is called WEIRD because it differs so much from the rest of the population. And even if a group of scientists eventually turn their attention to examining actual behavior, it is hardly possible to discern what is valuable and useful within the myriad of theories and constructs they multiply. I am painfully aware that the majority of the listeners did not see the analogy between practices of cargo cult believers and the scientists depicted by me earlier. They were unable to see neither the pointless bustle of the former and the latter nor how fruitless their efforts were. Nevertheless, I invariably see the analogy in the behavior demonstrated by partakers in rituals that are performed both by the islanders and scientists. As a rule, the cargo priests have such a profound faith in the meaning of their efforts that they pass on this belief to those around them, irrespective of whether they wear loincloths and heave their noses pierced or they wear a white laboratory coat and put an academic degree before their name. 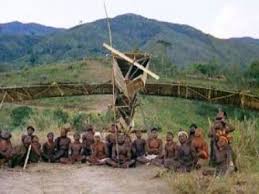